Final Part 3 Energy Perspective On the Dutch Elections – Where is the Discussion on Energy Transition and Climate Change?

In a series of blogs, Ceciel Nieuwenhout and Gijs Kreeft, both PhD researchers at the Groningen Centre of Energy Law, will expand on energy related topics which play a role in the campaign towards the upcoming Dutch parliament elections of March 15. See the first blog in this series for an introduction on the Dutch political landscape. 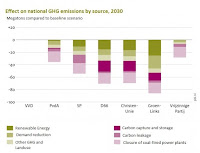 As the Netherlands are, to a large extend, located below sea-level, one would expect that climate change is taken very serious here. However, unlike other low-lying coastal areas, in the Netherlands the effects of climate change are seen as ‘manageable’.[1] Perhaps this is why climate change and the energy transition are not so much of an issue during the current election debates. This blog post will elaborate upon Dutch obligations with regard to climate action and the energy transition, what political and legislative initiatives currently exist, what the parties’ stances are for the coming elections and why climate change is not more prominently covered during election debates.
In December 2015, the international community committed to the Paris Agreement, limiting man-made climate change to 2 degrees Celsius (but preferably lower). With a swift ratification from many countries, the agreement has officially entered into force. The EU ratified the Agreement in October.[2] In parallel to the ratification by the EU, the individual EU countries need to ratify the agreement following their national procedures. Although bound through the ratification of the EU, the Netherlands has not ratified the Agreement individually yet. Furthermore, the Netherlands is also bound by the 20-20-20 goals of the current Renewable Energy Directive.[3] It is lagging behind: the Netherlands ranks 3th lowest when it comes to reaching the target for renewable energy in 2020.[4]

At the national level, the Dutch climate policy is influenced by the judgment of the Dutch court in the Urgenda climate case. An analysis of this landmark case by Dr. Ruven Fleming can be found here. The judgement specifies that CO2-emissions will have to be 25% lower in 2020 compared to 1990.[5] Although the current government pleaded that this threshold is within reach already,[6] many parties say that the Netherlands needs to do better when it comes to climate action and the energy transition.
Follwing this, GroenLinks and PvdA developed an ambitious Climate Bill to give an impulse to the slow energy transition in the Netherlands. The Bill aims for a 95% reduction of greenhouse gases emission in 2050 (compared to 1990), as well as 100% share of renewable energy in national energy consumption.[7] The Bill is currently supported by five parties (GroenLinks, PvdA, D66 and ChristenUnie, which is sufficient for a majority in the lower house (Tweede Kamer).[8] The Bill however was only submitted to the lower house at the end of January, leaving a too small timeframe for plenary discussion and adoption before the elections. Therefore, treatment of the Bill in the lower house has been postponed until after the elections.
The Planbureau voor de leefomgeving (PBL), which is the governmental environmental assessment agency, presented an analysis of the environmental and climate impact of the election programs of seven different parties in February of this year.[9] The analysis gives both an insight into the environmental effect of the proposed measures, as well of the costs. The report reveals that the expected greenhouse gas emissions reduction for 2030 differs quite extensively, depending on the respective party line. 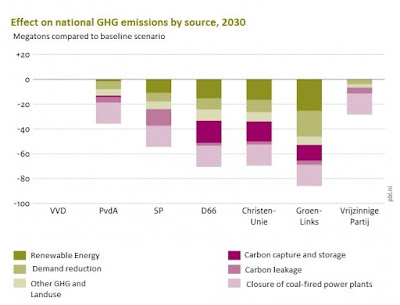 Source: PBL 2017
Although the parties have diverging views on the speed with which a carbon neutral economy shall be reached, as well as on the necessary measures, energy and climate did not feature prominently on the topic lists of the televised debates or the campaign in general. This might be partly explained by the outcome of a survey by IPSOS, a global market and opinion research firm, which revealed that the top four topics of interest to voters are norms and values, immigration, health care, and the state of the economy.[10]
The reasons for this disinterest in energy and climate issues could be the costs involved in the energy transition. The PBL report estimates that the envisioned climate agenda of GroenLinks will cost around 16,4 billion euros extra per annum. That comes down to approximately 1000 euro per Dutch citizen. Although the calculated costs for the agenda of the VVD are limited to around 0,5 billion per year, their position on coal-fired power plants and gas production in Groningen is not attractive to the majority of voters. As a result, both sides of the political spectrum have their own reasons to avoid the energy and climate related topics during debates.
Nevertheless, the neglect of energy and climate related topics during this election campaign led to multiple initiatives which aim to break this silence. Most notably, all youth organisations of the political parties issued a collective manifest on the topic. From the young members of the VVD to those of the Socialist Party, they all agree that the new cabinet should aim for the Netherlands to become front runner when it comes to sustainability.[11] Other citizens started online petitions to push for energy and climate to become a topic during the final television debate.
As mentioned in our first blog, 28 parties are campaigning to gain the favor of the voter. They all hope to fill as many of the 150 seat in parliament as possible. Based on current prognoses, which do not put any party above 30 seats, it may be expected that four parties are required to push a coalition over the 75 seats-hurdle, which are necessary to form a majority. It is, thus, difficult to make a prediction at this stage as to how the energy and climate agenda for the coming four years will look like.
At the end of this 3 part blog, we would like to thank Ruven Fleming for letting us borrow his blog. If you have questions and/or remarks regarding our series of blogs, please feel free to contact us at: c.t.nieuwenhout@rug.nl and/or G.j.kreeft@rug.nl.
[1] http://www.pbl.nl/en/publications/the-effects-of-climate-change-in-the-netherlands-2012
[2] https://ec.europa.eu/energy/en/news/paris-agreement-enter-force-eu-agrees-ratification
[3] Directive 2009/28/EC: http://eur-lex.europa.eu/legal-content/EN/ALL/?uri=celex%3A32009L0028
[4] https://www.cbs.nl/en-gb/news/2016/13/only-5-5-percent-of-energy-comes-from-renewable-sources
[5] https://uitspraken.rechtspraak.nl/inziendocument?id=ECLI:NL:RBDHA:2015:7196&keyword=urgenda (in English)
[6] https://www.rijksoverheid.nl/actueel/nieuws/2016/12/23/doelen-energieakkoord-binnen-bereik-co2-uitstoot-verder-beperkt (in Dutch)
[7] Klimaatwet, Kamerstuk 34534 no. 6 2016-2017, art. 3. Full version: https://www.eerstekamer.nl/9370000/1/j9vvhwtbnzpbzzc/vkbbnl4vbizm/f=y.pdf.
[8] Ibid.
[9] See for the full report in Dutch: http://www.pbl.nl/sites/default/files/cms/publicaties/pbl-2017-analyse-leefomgevingseffecten-verkiezingsprogramma's-2568.pdf.
[10]http://content1c.omroep.nl/urishieldv2/l27m1bef6cc539dd60c10058c68834000000.a668dd6e77897dd3afe4c23ba0eeb604/nos/docs/240217_ipsosonderzoek.pdf.
[11] https://twitter.com/jesseklaver/status/834473991205171201/photo/1?ref_src=twsrc%5Etfw.