An Energy Perspective On the Dutch Elections – Part 1: Gas Production in Groningen

March 06, 2017
In a series of blogs, Ceciel Nieuwenhout and Gijs Kreeft, both PhD researchers at the Groningen Centre of Energy Law, will expand on energy related topics, which play a role in the campaign towards the upcoming Dutch parliament elections of March 15.

At the start of this series of blogs on energy related topics in this Dutch parliamentary election cycle, it is useful to give an overview of how the Dutch political landscape currently looks like. In total 28 parties are competing for the favour of the voters. Obviously it goes well beyond the scope of this blog to discuss the energy agendas of all parties. Instead we will limit ourselves to the position of the parties which, based on prognosis, are expected to play a role in the formation of a new cabinet.


The current Dutch cabinet consists of a coalition between the Conservative Liberals (VVD) of prime minister Mark Rutte, and the Labour Party. Friend and foe are surprised that this marriage between the right-conservative VVD and left-progressive PVDA lasted for the full four year term. As the prognosis above illustrates, the biggest challenger of the Conservative Liberals this cycle is the populist Freedom Party (PVV) of Geert Wilders. Sentiments similar to those that have led to Brexit and the election of Trump may also result in the Freedom Party coming out of the election as the largest party in parliament. However, since all other parties have formed a cordon sanitaire around Wilders, it is highly doubtful whether he will be in the position to become prime minister.
Other parties of which the energy agenda will be subjected to scrutinization in this blog are (listed from left oriented to centre-right oriented): the Socialist party (SP), the Green Party (Groen Links), Social Liberals (D66) and Christian Democrats (CDA). 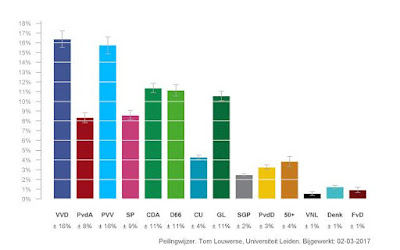 Gas Production in Groningen
The northern province of Groningen is situated on top of the largest natural gas field in Europe and the tenth largest in the world. The volume of the in 1959 discovered gas field is estimated at 2.8 trillion cubic meters. In the high days of production the field produced 100 billion cubic meters per annum. The revenues from the domestic sale and export of the gas have contributed to the realization of large projects such as the Delta Works in the southwest of the Netherlands which protect the Netherlands from the sea. The wealth which was gained through the discovery of the gas field also resulted in the development of an extensive social welfare system, in Dutch known as the ‘verzorgingsstaat’. Thus although the Groningen gas field is often referred to by economists in the context of ‘Dutch disease’, post-war Netherlands gratefully picked the fruits of the gas beneath its soil.
In recent years the sentiment towards gas production in Groningen has however made a 180 degrees turn. Although small earthquakes have been registered before, since 2003 the people of Groningen living on top of the gas field are confronted with earthquakes increasing both in magnitude as in frequency. This did not only initiate a legal and social debate about whether Shell and Exxon (both 50% shareholders of the venture operating the field) and the Dutch State should be held liable for damages, but also spurred the debate on whether gas production should be decreased or halted.[1]
The initial refusal of the government to drastically limit production volumes and dragging compensation procedures have led to the emergence of the sentiment among Groningers that the politicians in The Hague do not care sufficiently about their cause. This state of discord became apparent in the last provincial elections in which the traditionally left oriented voters in the rural areas of Groningen turned over to the Freedom Party of Geert Wilders. Especially for the Labour Party there is much at stake to win back the voters in what used to be a stronghold for them.
After a cabinet decision to limit production at 24 billion cubic meters per year did not lead to a decline in social unrest, the Dutch Parliament in February of this year unanimously adopted a motion in favour of further reducing the gas production in Groningen. The motion did not however include a specified maximum production volume. In the run-up to the elections it are especially the parties on the left part of the political spectrum which proclaim they want to bring down the production as soon as possible.[2] The Socialist Party and the Green Party both have stated that the production ceiling should be set at 12 billion cubic meters per year. The Social Democratic Labour Party has not referred to a specific number in its election program, but from its budgetary plans it can be deducted that they aim for 19 billion cubic meters. In an effort to regain some ground in the north, the Labour Party has proposed to create a fund to which the gas revenues should flow and suggests that half of the fund should be earmarked for compensation and projects in the Groningen region.
More in the centre of the political landscape, the social-liberals aim for the complete halt of production, although their budgetary plans still include the revenues of winning of 21 billion cubic meters of gas per year. More in the right spectrum, the conservative-liberal party of the sitting prime minister Mark Rutte is more cautious in referring to a specific number but rather states that a balance needs to be found between safety and security of supply. Geert Wilder’s Freedom Party has refrained from making any statements on production levels. Finally, the party DENK (the Dutch word for ‘think’) which aims for voters out of minority groups, is the only party which wants to raise production by 12 billion cubic meters as a means to compensate for the closure of coal-fired power plants.
Finally, all political parties agree that there is a need for more transparent, independent and efficient compensation procedures. Until now, the Nederlandse Aardolie Maatschappij (NAM), which is the venture between Shell and Exxon operating the Groningen gas field, still had an important role in the decision-making procedures concerning the allocation of compensation. All parties therefore call for the strengthening of the legal position of the people in the region who are affected by the earthquakes. It is noteworthy that already in 2016 a law has been adopted which establishes a reasonable presumption of causation between the exploitation of production installations, the earthquakes and damages to property.[3] It is then for the defendant to refute this presumption.
Next blog: what do with coal-fired power plants?