On 11 December 2019, the new European Commission presided by Ursula Von der Leyen presented the European Green Deal. The aim for the EU is to become climate-neutral by 2050 and this will require massive investments. The financial part of this Green Deal is the European Green Deal Investment Plan (EGDIP), revealed on 14 January 2020. This programme should mobilise “at least €1 trillion of sustainable investments” until 2030. The graph below shows the split in terms of origin of the money for such investments with half of it to come directly from the EU budget, over a quarter from public and private investments guaranteed by InvestEU, over a 10% from national co-financing, a reduced part from the EU ETS and, in the middle of this vast sum of money, the Just Transition Mechanism (JTM).


The JTM aims for “a fair and just green transition […] to support workers and citizens of the regions most impacted by the transition.” To do so, this mechanism will mobilise at least €100 billion in investments over the period 2021-2027 (p.1). In a nutshell, the European Commission acknowledges that the transition towards a climate-neutral economy will have economic and social impacts, especially on regions that rely on fossil fuels extraction and treatment (e.g. refineries) or on highly carbon-intensive industries (such as cement plants or smelters). These regions will or strongly risk to lose at some point their industries and the workers their jobs. The JTM endeavours to smoothen these socio-economic turbulences and to “leave no one behind”, which is the motto used by the Sustainable Development Goals (SDGs) as well.


-          The JTF composes the 1st pillar. The fund will be allocated with €7.5 Bn, but for each € of investment from this fund, EU Member States have to add contributions. In total, it is expected to lead to €30 to 50 Bn of investments. This fund will directly allocate money, typically as grants. On 14 January 2020, a proposal of regulation establishing the Just Transition Fund was published, detailing the rules that should apply to it.


-          The JTS composes the 2nd pillar. The scheme is part of the InvestEU programme and should attract private investments for up to €45 Bn by providing an EU budget guarantee. These investments will have to go into the just transition.


-          The Public sector loan facility composes the 3rd pillar. The facility consists of concessional loans to the public sector and should trigger between €25 and 30 Bn of investments. It will rely on €1.5 Bn from the EU budget and on a European Investment Bank lending of €10 Bn. A legislative proposal will be presented in March 2020 to officially set it up. 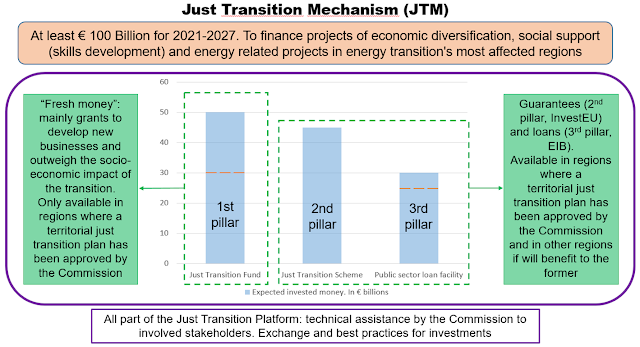 For each pillar, the range of projects that can be financed varies.
Concerning the JTF, recital 5 of the proposed regulation on this instrument states that actions supported by the JTF should directly contribute to alleviate the impact of the transition by financing the diversification and modernisation of the local economy and by mitigating the negative repercussions on employment. This is further detailed in article 4 (2) of the same document which provides that the JTF shall exclusively support a limited list of activities. These include economic diversification by investments in small and medium-sized enterprises (SMEs), in new firms, in research and innovation, in decontamination of sites, in the circular economy or on workers training and in job-seeking assistance. The focus is therefore mostly, as expected, on socio-economic development or alleviation. However, the energy aspect is not excluded, as JTF’s investments can also be channelled towards the deployment of technologies and infrastructures for affordable clean energy, greenhouse gas emission (GHG) reduction, energy efficiency and renewable energy sources. Interestingly enough, article 5 of the proposed regulation sets a list of activities the JTF shall not support and it includes the decommissioning or construction of nuclear power stations. It remains to be seen if this provision will make it to the final version.
Concerning the JTS, investments can be guaranteed if they help the affected regions to “find new sources of growth”, and this could include projects for decarbonisation, economic diversification of the regions, energy, transport and social infrastructure (p. 4), which is a very broad scope.
Finally, the logic of the public sector loan facility is to lend money to local authorities in order to finance “projects which do not generate revenue and would otherwise not get financed”(p. 6). Typically, infrastructures would fit within this range, with examples such as energy and transport infrastructure, district heating networks, and renovation or insulation of buildings.

The projects to be financed by the JTM will not be located everywhere as the purpose of this mechanism is to relieve the most affected regions inside of each Member State. To identify these regions, the European Commission proposes to the Member States to adopt territorial just transition plans.
Article 7 of the proposed regulation on JTF sets the legal regime for these plans. They should be prepared “together with the relevant authorities of the territories concerned”, meaning that the local authorities will have a say and that it will not only be a state-crafted plan. The identified territories shall be those most negatively affected based on the economic and social impacts resulting from the transition, in particular with regard to expected job losses in fossil fuel production and use and the transformation needs of the production processes of industrial facilities with the highest greenhouse gas intensity. These plans must contain some specific elements such as the type of operations to be financed or a description of the transition process at national and at local level towards climate neutrality which has to be on par with the Member State’s National Energy and Climate Plan (NECP), a key element of the 2030 GHG reduction targets for the EU as part of the Clean Energy Package. This point means that if a Member State does not seriously aim to reach climate neutrality by 2050, its plan will not be validated by the Commission and therefore no project will be financed by any of the JTM’s 3 pillars as this is prerequisite. Poland, which should by far be the first beneficiary of the JTM according to the the Commission’s calculations, will therefore have to revise its climate ambitions upward to access the money set aside for it.
In a nutshell, these plans are drafted by the Member States with their local authorities, validated by the Commission and the JTF can only finance projects inside of the most affected regions which have a valid plan. The investments under pillars 2 and 3 can take place either in the identified regions with an approved plan or in projects located elsewhere but directly benefiting those regions. The geographical scope is therefore larger for pillars 2 and 3.

The JTM, according to the Commission itself, is not only about money (p. 5). Actually, the Commission intends to provide technical support to the Member States in order to prepare their territorial plans and to implement them. In this regard, as stated by recital 14 of the proposed regulation on JTF, “the Commission should set up a Just Transition Platform […] to enable bilateral and multilateral exchanges of experience on lessons learnt and best practices across all affected sectors.” The aim is apparently also to generate a pipeline of projects for the most affected regions (p. 3), building on what is being done in other regions which would have similar characteristics. The Commission is also committed to “make it easier to invest in the transition by making sure that the regulatory framework provides the right incentives“ p. 5). This is further developed in the proposed regulation for the JTF, where it is stated that sectoral state aid rules could be eased to finance projects complying with the just transition goals in the most affected regions (p. 2).

3.    Critical appraisal
Despite the very positive development of an EU legal framework for identifying the transition’s most affected regions, planning and financing actions and projects, some critics can be formulated.
The main critic actually concerns the restrictive interpretation of the concept of just transition that the European Commission is promoting while it is gaining momentum among academics and NGOs. In the political discourse, the vocabulary tends to be very inclusive, with the goal of “letting no one behind”, the consideration of the “most vulnerable” and “most exposed to the harmful effects of climate change and environmental degradation“ (p. 1 and 11), the notions of solidarity, fairness and justice that are used, and the overall focus on people and citizens. However, in reality, when analysing the proposed legislation, the main focus is clearly placed on workers and jobless citizens, rather than the people. As well, as explained in this note, the solidarity under the JTM will only take place within the identified regions, while there are plenty of justice issues in the energy transition to climate neutrality in all regions of the EU and over the globe. The fact that for example the territorial just transition plans are being redacted by Member States and the local authorities but without requiring  the involvement of the local inhabitants underlines this restricted vision of a just transition.

4.    Conclusion
The development by the European Commission of a dedicated legal framework for a just transition and its commitment to provide support for the regions which will be the most severely impacted by the transition to a climate neutral economy is to be applauded. This is absolutely needed and Ursula von der Leyen is right when she says that this transition “will only work if it is just - and if it works for all.” However, there seems to be a gap between the discourses on the JTM and the reality of the proposal. If the latter mobilises sizable sums of money and sets criteria to plan its use as efficiently as possible in the most affected regions, the former could have created expectations for a legal framework toward an all-encompassing just transition which will not materialise.