The Modernization of the Energy Charter Treaty 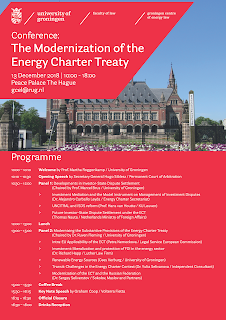 This year marks the 20th anniversary of the entrance into force of the Energy Charter Treaty (ECT), a multilateral treaty that regulates international trade, transit, and investment in the energy sector throughout Europe and Asia. In addition, the Energy Charter Conference has recently initiated a modernization process which aims at bringing the treaty in line with contemporary policy tendencies.

In light of these milestones, the Groningen Centre of Energy Law (GCEL) of the University of Groningen will organize a conference on the 13th of December 2018 in the Academy Hall at the premises of the Peace Palace The Hague, The Netherlands. I am having the honour to chair panel 2.

The following topics will be discussed


The conference will be opened by Secretary General Hugo Siblesz of the Permanent Court of Arbitration and the Key Note speech will be delivered by Mr. Graham Coop (Volterra Fietta).
Entrance will be free of charge; however, registration is required and can be made here.